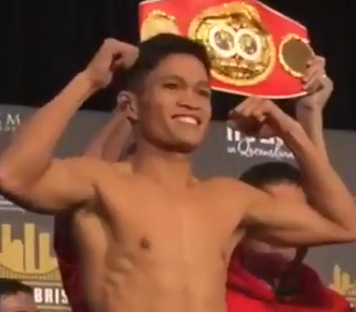 Jerwin Ancajas was born and raised in Panabo, Philippines, a suburb of Davao City.
Jesar, his younger brother, introduced him to boxing in the second grade. Before turning
pro in 2009, at the age of 17, Jerwin won multiple national titles, including a gold medal
at the Palarong Pambansa. In amateur boxing, Jerwin Ancajas had a 90–5 record.
Jerwin Ancajas is a resident of Brgy. Ramirez, Magallanes, Cavite, with his brother;
Jesar Ancajas, Magallanes, Cavite.
In July 2009, Ancajas made his professional debut. He defeated Rex Tito in SM City
Lipa for his first major title, the WBO Asia Pacific Youth junior-bantamweight title. Jerwin
Ancajas lost a majority decision against Mark Anthony Geraldo in his fifteenth
professional fight.
On September 3, 2016, he fought McJoe Arroyo to become the IBF junior bantamweight
champion. For the bout, Ancajas received only $3,750. He had an 11-bout winning
streak when he entered the battle. Ancajas outboxed Arroyo and dropped him in the
eighth round to win by unanimous decision.
On January 29, 2017, Ancajas successfully defended his title, defeating José Alfredo
Rodrguez by technical knockout after Rodrguez was unable to continue due to injury. In
July 2017, Ancajas defended his title against Teiru Kinoshita on the undercard of Manny
Pacquiao-Jeff Horn. Kinoshita was beaten by Ancajas, who opened a gash over his
right eye and pummeled him to the body before dropping him with a right hand to the
body in round 7. Kinoshita won the count, but the bout was stopped by the referee,
giving Ancajas the TKO victory.
Ancajas defeated Jamie Conlan by TKO in round 6 on November 18, 2017. Conlan had
been beaten since the first round, when he was knocked out by a body shot. He was
dropped three more times before the bout was stopped by the referee. Referee Steve
Gray docked Ancajas a point in round 5 after a valid shot to Conlan\’s abdomen. Ancajas
successfully defended his title for the third time in 2017, all by technical knockout and in
separate locations.
Ancajas signed with Top Rank in December and stated that he would make his
American debut in February 2018, defending his title against Israel González in Corpus
Christi, Texas. In his US debut on February 3, 2018, Ancajas successfully defended his
IBF title.
Ancajas faced IBF #1 ranked title opponent Jonas Sultan in his next title defense.
Ancajas won the bout by a substantial margin on all three scorecards, 119–109,
119–109, and 117–111, respectively.
Ancajas fought IBF #14 Alejandro Santiago Barrios on September 29, 2018. Barrios
was a strong opponent for the IBF champion, but the bout ended in a draw, allowing
Ancajas to retain his title.
Ancajas then faced #1 IBF contender Ryuichi Funai in his following fight. For the
majority of the fight, Ancajas had the upper hand, as Funai was able to take some of
Ancajas\’ finest strikes while failing to respond with any of his own. In the seventh round,
Ancajas defeated his opponent.
Ancajas successfully defended his championship against IBF #14 Miguel Gonzalez on
December 7, 2019. Ancajas won by TKO in the sixth round.

A new Pinoy boxer rising? This might be the case if we’re talking about the social media influencers-turned-boxers.

Tiktoker Salt Papi was the talk of the town after his vicious knockout against Youtube sensation Josh Brueckner, a taller, bigger guy.

The Filipino-British boxer landed a perfect right hand right to the face of Brueckner in just the first round.

They served as an undercard of KSI vs. Faze Temperr.

Pro boxer and rising star Ryan Garcia was impressed by Salt Papi’s victory convincing him that the latter should next face Jake Paul.

They are both undefeated in boxing and all of their wins are via knockout.

After the victory, Salt Papi posted a video clip on his Instagram showing a comparison of his knockout to Manny Pacquiao’s iconic KO hit to Ricky Hatton.

The post received lots of comments including boxing’s only eight-division world champion himself.

Pacquiao wrote on the comment “Pwede Na” in which Salt Papi replied with a “salamat po.”

In a shocking announcement, Jon Jones confirmed that he is upping his division and will fight Ciryl Gane for the UFC heavyweight world title.

The development was leaked after T-Mobile Arena displayed an ad about the fight that was later on confirmed by the former pound-for-pound UFC fighter.

“Day one of four, just a few weeks out from my first heavyweight championship against Ciryl Gane,” said Jones.

The mega-bout is expected to take place on UFC 285. Jones has been out of the Octagon for almost three years now.

“Absolutely, I’d love to have Henry [Cejudo] coaching me for this Ciryl Gane fight. Hopefully our schedules can align and we can get on the same page,”  said Jones.

While Gane has 11 wins, one loss and zero draw.

The date of the collision has yet to be announced as of writing.

Boxing’s only eight-division world champion Manny Pacquiao is set to continue putting on the gloves as he surprisingly signed under Japan’s Rizin Fighting Federation.

The MMA promotion made it known through their social media with details that the former Philippine senator will box this year against a Japanese fighter.

He recently came back to the sport with an exhibition bout against Korean YouTuber DK Yoo.

“I have agreed with Rizin to fight next year. That date will soon be announced, and also my opponent that Rizin will choose, and I’m open and excited to fight a Japanese fighter,” Pacquiao said during his signing with Rizin.