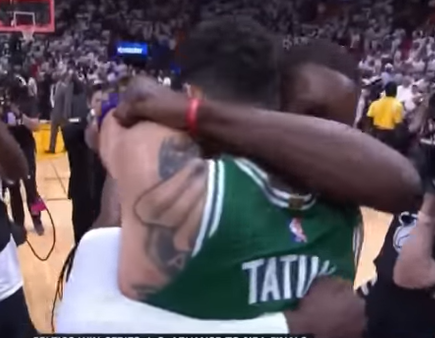 Defense was once again the name of the game for the Boston Celtics as they took the series lead against the Golden State Warriors with a 116-100 win in Game 3.

The trio of Jayson Tatum, Jaylen Brown and Marcus Smart were the first players to record a 20-5-5 stats apiece in the modern era.

After comfortably leading by double-digit in the first half, the Warriors stormed back with their trademark third quarter outburst and took the lead at one point, however, the Celtics kept their heads in the game to still get the upperhand at the end of the quarter.

In the final canto, Boston started out strong and they never looked back as they are now two games away from becoming NBA Champions.

Meanwhile, the bright side for the Warriors was Klay Thompson who found his rhythm after shooting miserably in the first two games dropping 25 points to back up Steph Curry’s 31 but it wasn’t enough to get the dub.

Curry explodes for 43 as Warriors even the series with Boston

A true “monster” as Inoue TKOs Donaire in rematch